Read the following case and answer the questions given at the end of the case:

The Designated Authority (herein after referred to as Authority), under the Rules, received written application from M/s. A Chemicals, a unit of M/s. B Enterprises, India Ltd. for and on behalf of domestic industry, alleging dumping of Vitamin-C originating in or exported from USA and Canada.

The Authority issued a public notice initiating anti dumping investigations dated 14 August, 2002 and notice of Preliminary Findings dated 1st November 2002 was published in the Gazette of India, Extraordinary, recommending imposition of Anti Dumping Duty on Vitamin-C originating in or exported from USA and Canada classified under heading 2936.27.00 of the Custom Tariff Act. The Authority provided an opportunity to all interested parties to present their views orally on 15th January 2003. The Authority made available non-confidential version of the evidence presented by various interested parties in the form of a public file kept open for inspection by all interested parties and the comments received on the same was duly considered in Final Findings.

• quantum of imports and dumping margin from each of the subject countries is more than de-minimus;

• cumulative assessment of the effect of imports is appropriate in light of the conditions of competition between the imported article and the like domestic articles.

(c) Petitioner submitted that the following parameter summarizes injury to the domestic industry.

• Imports of subject goods from the subject countries have increased significantly in absolute terms.

• The share of imports from the subject countries in relation to imports of subject goods in India has increased significantly.

• The share of imports from subject countries in relation to demand in India has increased significantly.

• Production, capacity utilization of the domestic industry which had been increasing till 2000-01 declined during period under investigation.

• The sales volume of the industry has also declined inspite of reduction in selling price.

• The landed value of imported material was significantly below the selling price of the domestic industry causing price undercutting in the Indian market.

• The domestic industry continues to incur significant financial losses as a result of continued dumping in the Indian Market.

• The dumping margin are not only more than de-minimus, but also very significant.

(f) On Product under Consideration The product involved in the present investigation is Vitamin-C in all its form and derivatives. It is also known as ascorbic acid. It is classified under customs subheading no. 2936.27 under the Customs Tariff Act 1975.

(g) On Like Article There is no significant difference between the product imported from subject countries and produced by the Indian industry in terms of physical & technical characteristics (or product specifications), manufacturing process, plant & equipment, technology, function and uses, marketing, pricing, tariff classification and customer perception. The goods produced by the petitioners and the product under consideration are substitutable with each other.

(h) On Domestic Industry The petition was filed by M/s. B Enterprises India Limited. There are two other producers of Vitamin-C in India. M/s. XYZ Limited is the other producer of the product. M/s. ABC Limited had also created capacity for production of subject goods. However the company has suspended production long back. Two producers namely M/s New Search Ltd & M/s Bio Chemicals Ltd. have commenced their production after period of investigation, albeit in small volumes. There are other units, namely M/s Cardo Drugs Ltd. & M/s Ton Pharma which are producing Vitamin-C for export purposes, after the investigation period. The petitioner accounts for major proportion of Indian production and thus satisfies the standing under anti dumping duty rules.

Views of Exporters: M/s. Albert Mumbai, representing the producer M/s Albert, have indicated that neither the exporter nor its affiliated have received communication regarding the petition and primary investigation for anti dumping duty on Vitamin 'C' of USA origin. They requested the Authority to give at least one month extended period for contesting the case to respond to the initiation notice. However, no response was received by the Authority, from the exporter.

• Domestic Industry is importing the final stage intermediate 2 --Ketogluonic Acid from China and their cost of production is substantially lower than the producer in exporting countries.

• There is difference between the technologies adopted by the petitioner and by produced by the subject countries.

As regards to claims of nil export from subject country Canada, it is noted that substantial imports have been reported by Directorate General of Commercial Intelligence and Statistics (DGCI & S), Kolkata. Further, DGCI&S, Kolkata, furnished transaction wise details of imports for the period of investigation from Canada. Chennai Customs, also reported that a quantum of 57.95Mt has been imported during the period of investigation, which constituted around 9.5% of total imports, well above the deminimus limit.

Like Articles: The Authority noted that the Vitamin-C produced and sold by domestic industry and those imported from the subject countries have similar characteristics and should be treated as like articles, petitioners have also claimed that there is no significant different in the technology adopted by petitioner and by the producers in these countries. Though, every manufacturer fine-tunes production process according to available facilities and necessities.

Domestic Industry: The petition has been filed by M/s. B Enterprises India Limited having its Registered Office at Baroda-390007. There are two producers of Vitamin C in India. M/s. XYZ Limited is the other producer of the product. Earlier, M/s. ABC Limited had also created capacity from production of Vitamin-C, however, the company is closed. Authority held that the petitioner accounts for major proportion of the Indian production and thus satisfies the standing, under the Rules.

Dumping: To determine the dumping the Authority sent questionnaires to all the known exporters and producers of Vitamin C in Subject Countries. However, none of the exporters except M/s Albert from subject countries responded to the Authority and have not furnished any information in the form and manner prescribed by the Authority. In the circumstances Normal Value has been based on the price information viz price list of one of the producer of subject goods in USA, provided by the domestic industry in accordance with Rule 6(8). The Normal Value for USA and Canada has been determined at US $ *** per Kg.

• In the instant case, the imports of Vitamin-C from the subject countries have increased significantly in absolute terms, as may be seen from the table below: 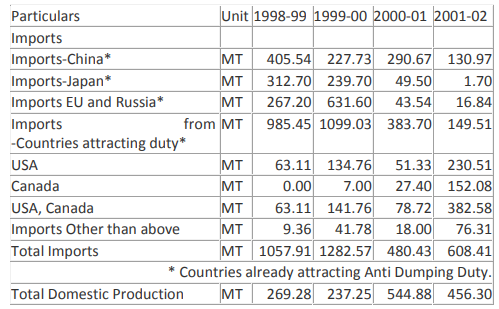 • The exporters from the subject countries have reduced the prices significantly, as may be seen from the following table:

• The productions of the domestic industry have increased over years till 2000-01, declined in the period of investigation. Authority noted that the sales volume of the industry have declined over the period, the industry has been forced to reduce its prices significantly at the cost of its profitability in view of the dumped imports.

• It is evident from the table below that the selling price of the domestic industry have declined over the years. Selling price have increased marginally in 2000-01 over, 1999-2000, however, the same declined again in the investigation period.

• The Authority noted that the dumped imports have forced the domestic industry to reduce its prices in spite of increase in the cost of production.

• The domestic industry has been forced to reduce number of employees.

• Inventories with the domestic industry have declined.

• On the lines of changes in production, productivity of the domestic industry increased upto 2000-01. The same has, however, declined again in the investigation period as compared to previous year.

• On the lines of production and sales, growth of the domestic industry was positive upto 2000-01 (even though the same was negative in 1999-2000), the same became negative in the investigation period.

• The domestic industry is finding it difficult to plan fresh investments given that the performance has materially deteriorated.

Causal Link: The Authority held that the material injury to the domestic industry has been caused by imports from the subject countries that are major exporters of Vitamin C to India.

Indian Industry's Interest and other issues: It is recognised that the imposition of anti dumping duties might affect the price levels of the products manufactured using the subject goods and consequently might have some influence on relative competitiveness of these products. However, fair competition on the Indian market will not be reduced by the anti dumping measures, particularly if the levy of the anti dumping duty is restricted to an amount necessary to redress the injury to the petitioner companies. On the country, imposition of anti dumping measures would remove the unfair advantages gained by dumping practices, would prevent the decline of the petitioner company(ies) and help maintain availability of wider choice to the consumers of Vitamin-C. Imposition of anti dumping measures would not restrict imports from the subject countries in any way, and therefore, would not affect the availability of the product to the consumers.

Conclusions: The Authority, after considering the foregoing, concluded that

(a) Vitamin-C (Ascorbic Acid) originating in or exported from USA, Canada and has been exported to India below normal value, resulting in dumping:

(b) The Indian industry has suffered material injury

(c) The injury has been caused cumulatively by the imports from the subject countries.

(d) It is considered necessary to impose definitive anti-dumping duty, on all imports of Vitamin-C originating in or exported from USA and Canada.

Accordingly, the Authority has therefore, decided to recommend definitive Anti-dumping Duty to be imposed, on all imports of Vitamin-C and most commonly used synonyms of Vitamin C like Ascorbic Acid, L-Xyloascorbic Acid falling under Custom Heading 2936 originating in or exported from USA and Canada. An appeal against this order shall lie to the Customs, Excise and Gold (Control) Appellate Tribunal in accordance with the Act.

In view of the facts and circumstances given in the case above, answer the following questions:

(a) Determination of dumping is based on two major parameters. Explain these parameters with the help of facts given in the above case.

(b) “Sufficient evidence must be provided to support the contention of material injury.” Elaborate keeping in view the above case.

(c) On the facts and circumstances of the case, whether the Designated Authority has followed proper procedure in determining the anti dumping duty to be imposed on the importers. Discuss.

(d) Do you think the anti dumping duties should be imposed on importers? Is it unfair competition or valid defense of the domestic industry? Discuss citing the above case.

(e) What role can WTO play in the antidumping cases? Elaborate on the anti dumping policies of WTO.

Answer all of the following questions.

(a)    You are a company secretary of Hindustan Exports Ltd. Explain how will you despatch the leather jackets manufactured by the company to Dubai without paying duty from India.

i) Letter of credit

India is a huge country with a vast domestic consumer market. Then why Indian firms are targeting international markets? Do you think Indian firms should go global? Critically analyse.

Some fundamental principles are the foundation of multilateral trading system. Elaborate.