Suppose that the following order has been passed by a Whole-time Member of SEBI.

BEFORE THE SECURITIES AND EXCHANGE BOARD OF INDIA

IN THE MATTER STE LTD

Under Regulation 28(2) read with Regulation 38 (2) of the Securities and Exchange Board of India (Intermediaries) Regulations, 2008

2. Pursuant to the said investigation, it was alleged that one of the entities, viz., M/s ROSE (hereinafter referred to as ‘ROSE’/ ‘the noticee’), received unlisted shares of STEL from various entities in off market transactions and thereafter transferred these shares to brokers who then offloaded the unlisted shares on the market.

4. Subsequently notices dated December 29, 2009 and June 09, 2010 (hereinafter referred to as the ‘SCN’) under Regulation 28 of SEBI (Intermediaries) Regulations, 2008, were issued to the noticee, asking it to show cause as to why action as recommended by the Enquiry Officer or a higher penalty should not be imposed on the noticee. The noticee was advised to reply to the SCN, within twenty one days from the date of receipt thereof. It was also informed that in case of failure, it would be presumed that it had no explanation to offer and SEBI shall be free to take such action in the manner as it deemed fit. A copy of the Enquiry Report was also forwarded to the noticee along with the SCN.

i. The noticee was holding these shares in trust for the allottees.

ii. The shares were not unlisted shares.

7. I note that the paid up capital of the company as on January 1, 2002 was Rs.33,60,00,000/- (3,36,00,000 shares of Rs.10/-). The above capital of the company consisted of 3,00,00,000 shares allotted on a preferential basis (swap for consideration other than cash). The shares of the preferential allotment remained unlisted at BSE. Hence, the submission of the noticee that the shares were not unlisted is without merit.

8. I note that the major brokers/sub brokers and their clients who had traded during the investigation period are as under: 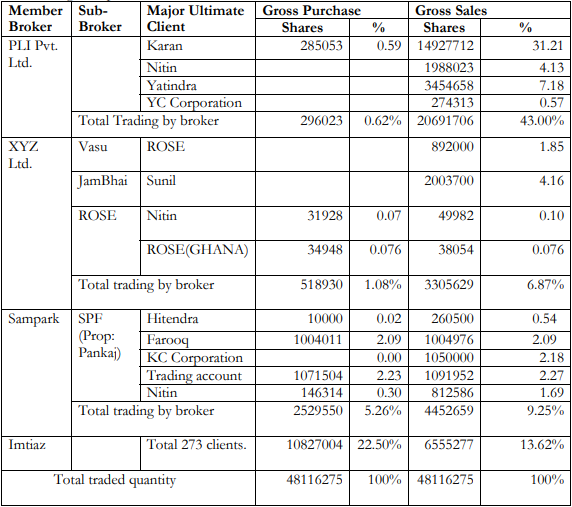 9. As it was observed that a few clients who were the major sellers had sold more than the listed capital of the company, while their purchases were comparatively less as stated above, demat accounts of these clients including Karan, Nitin, Yatindra, ROSE and Sunil, KC Corporation were analyzed to find out the source of their acquisition. Analysis of their demat statements revealed the following:

i. The preferential allottees had dematerialised the shares they had received in the allotments and had transferred these shares to Rinku and GHANA (proprietor of M/s ROSE, the noticee herein).

10. Subsequently, the noticee delivered these shares to the brokers/sub brokers, details of which are stated below. The shares were sold in the market by these brokers/ subbrokers.

The aforesaid shares were unlisted. Thus, it is alleged that the noticee aided and abetted the allottees in off loading the shares which they received in the preferential allotment.

11. I note that none of the aforementioned entities who traded in the scrip, except GHANA (proprietor of M/s ROSE), had received any shares through off- market transfers, nor had they delivered any shares to the respective brokers. Their delivery obligations were met through third party delivery by Shri GHANA (ROSE).

12. The scheme of manipulation in the scrip of STEL can be represented diagrammatically as under: 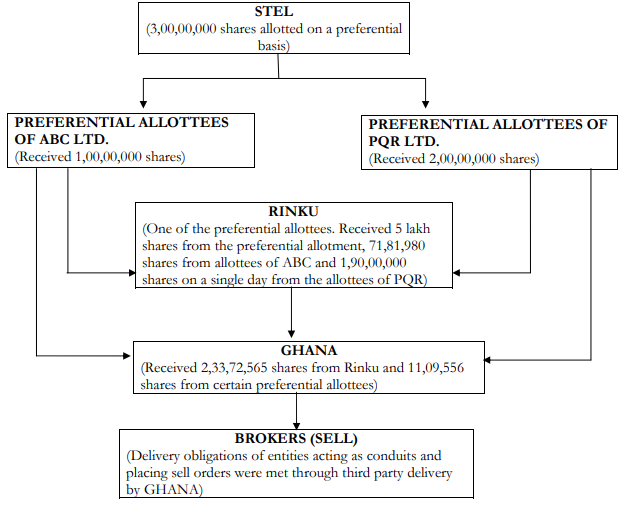 13. Thus, I note from the above that the noticee was part of the manipulation in the scrip of STEL as it received shares from the allottees in the preferential allotment through offmarket and subsequently transferred to the brokers/sub-brokers for sale through the market.

15. I also note that 1,83,957 shares were sold by M/s PLI Pvt. Ltd. On behalf of ROSE as client, but contract notes were issued in the name of Mr. Karan. The noticee, during the proceedings before the Enquiry Officer, admitted that the transaction was on behalf of Mr. Karan, and submitted that the same was due to an error and has been rectified.

16. From the above, I find that the noticee has not only received the shares in off market from Rinku and other preferential allottees but also transferred the same to PLI Pvt Ltd., XYZ Ltd. and SPF, who in turn sold them in the market. By doing so, the noticee has aided and abetted the preferential allottees, brokers/sub-brokers and clients in offloading the unlisted shares in the market.

18. Therefore, taking into consideration the facts and circumstances of the case, I, in exercise of the powers conferred upon me in terms of Section 19 of the Securities and Exchange Board of India Act, 1992 read with Regulation 28(2) of Securities and Exchange Board of India (Intermediaries) Regulations, 2008, hereby state that the certificate of registration of the noticee, M/s ROSE (Prop. GHANA) (SEBI Registration No. __________) (PAN: __) be suspended for a period of six (6) months from the date of this order.

19. This order shall come into effect on expiry of 21 days from the date of this order.

Draft an appeal to Securities Appellate Tribunal under Section 15T of the SEBI Act, 1992 against this order in about 1500 words.

(i)      Whether the transfer of all the shares by Mrs. Jain and Mrs. Malhotra in unlisted companies i.e. AHPL, AIPL and DRPL by way of gift to their immediate relative i.e. brother ( who is not directly or indirectly part of the promoter group of target company of share holder of any of the unlisted holding company) shall attract the provisions of SEBI (SAST) Regulations, 2011? If the answer is yes, explain with detailed provisions which are attracted.

(ii)      Whether the above said transfer of shares by Mrs. Jain and Mrs. Malhotra in unlisted companies i.e. AHPL, AIPL and DRPL by way of gift to their immediate relative i.e. brother shall be eligible for exemption under the SEBI (SAST) Regulations, 2011? If yes, then subject to which regulation it can claim exemption?

(ii      Whether for the above said transfer, the individual promoters of AHPL, AIPL and DRPL i.e. Mrs. Jain and Mrs. Malhotra and their brother will be deemed to be qualifying person s for claiming exemption?

Question No. 3 Hedging has generally proved to be one of the most popular techniques for risk management, it is imperative to test its efficiency, and estimate its effectiveness as a risk management tool in a quantitative manner. How does various future contracts traded in commodity markets of India improves hedging efficiency?

Question No. 4 Money market mutual funds are the lowest-risk variety of mutual funds, but they aren't risk-free. Discuss.

Question No. 5 Write a short note on how commodity derivative market has helped in price discovery and price risk management. .

Question No. 6 Compare the settlement mechanism of Capital and Commodity Market.