Question No. 1 Read the case study and answer all questions given at the end of the case:

ABC ALUMINIUM COMPANY PVT. LTD. This case relates to m/s ABC Aluminium Company Pvt. Ltd, a SSI unit located at Delhi Rohatak road, Haryana. The unit is in an area where cluster of industries have come up. It is located in an industrial area where all the infrastructure facilities are available.

The total capacity of the plant was 10 TPD which comes to 3000MT per annum. The company was provided medium term loan (MTL) of Rs 150.00 lacs and a cash credit (working capital) advance of Rs 160.00 lac. The loan was sanctioned by a nationalized bank at Patna and a sub limit was provided from one of the branches located at New Delhi for better control and supervision of account.

The promoters (directors) were from Patna (Bihar). They had a wooden ply industry at Patna, where they earned good money. Later on, during 1996 the pollution control board-department of government did not permit falling of the trees and transporting of local wooden logs and owner of the ply unit who promoted ABC Aluminium Company Pvt. Ltd deserted Patna and shifted to Rohtak for setting up this aluminium based plant.

·  Memorandum and Article of Association of the Company.

·  Details of layout- land, building and detailed drawings of;

·  Estimate of civil construction duly signed by a civil engineer.

·  Details of collateral securities of directors- land and building offered.

·  Details of land and building of the plant allotted by Government at Rohtak.

·  Means of financial strength of promoters and total source of capital to be raised.

The bank appraised and sanctioned the loan. The raw material is locally available and import of scrap material is permitted at lower excise duty and found to be competitive.

The project performance was critically examined by the bank before sanction of the loan. The parameters covered were:

· Capacity of the project to perform.

·  The Break Even Point

·  Elements of cost of production

Based on the true value of expenses the projected performance at the time of sanction of loan was as under:

Based on the performance the term loan against fixed assets amounting to Rs 150 lacs was Sanctioned to be repaid in seven years and was termed as medium term loan (MTL). Also using the Tandon committee norms a working capital of Rs 160 lacs was sanctioned.

After the sanctioned was made following securities were obtained:

·  Pledge of land, buildings, plant and machinery and other assets of the company.

·  Liens on the shares hold by directors.

·  Creating charge of assets of the company with Registrar of the Company, being a private  limited company

Later on during the year 2002 the company’s performance declined which was a threat and an early warning signal for the bank and for the company. The symptoms noticed by the bank were:

·  Sales proceeds were not fully rooted through bank account.

·  The term loan instalments became overdue due to non-payment in time.

The matter was reported to the head office of the bank and a detailed study was conducted by a team of experts the details of diagnostic study and its recommendations follows.

Technical feasibility and problem faced by the company were conducted, the details of which are:

It was found to be a successful process and was accepted by the bank.

Capacity of the plant

The machines were found in sound state of operation and the capacity was arrived at 3000 MT per annum while working on three shifts.

During the study to minimise losses and improve the quality of product following recommendations were made:

·  The scrap should be shorted out based on their quality.

·  Small and lighter scraps should be bundled on bundling machines to give it a compact look. For each charge an input output record needs to be maintained to measure operational losses.

· The quality of raw material should be chemically examined before charging in to the furnace. For this a simple material testing equipment is needed. The charge to the furnace needs to be standardized.

· At furnace point there should be a temperature measuring device to exactly note the temperature.

It was observed that land and building is adequate to accommodate the present facilities needed for production and there is a room for 100% expansion.

At the time of financing the proposal there was no room for tools and dies which is a large component of investment. The company created a die-shop by diverting funds without informing the bank. It was a necessary component of the project cost which was not taken in to account while sanctioning the project. The cost of die-shop and dies was about Rs 20lacsand this resulted in to short fall in working capital fund due to diversion in this case short term source was used for long term uses causing a setback in the current asset value. The project was found technically feasible and was in a perfect working order.

Following data were analysed and based on these current data the economic feasibility was determined:

·  Cost of raw material- a material-mix was arrived at. The weighted average material  cost was arrived at Rs 89,250 per MT including 5% losses during the process.

It was seen that the present working capital limit was adequate but there was a gap between the current asset needed and current asset available. Which needs to be bridged by the company?

The company was found to be economically viable and capable to serve its interest and instalments for medium term loan already granted to it.

·  The company did not record its sales fully and due to unrecorded sales it resulted in to wrong performance than actual.

· The company also followed the practice of under billing

·  Company diverted about Rs 25lacs in creating a tool room and dies which resulted in to diversion of fund within the industry (diversion from short term sources to long term uses).

· The company opened an account in different bank and routed the sales and deposit  through current account which was not proper.

· There was exemption of sales tax (vat) which the company did not avail fully which was  due to their inclination towards cash dealing without billing.

· The bank-customer relation was affected badly leading to strain relationship.

· Stock statements were not submitted in time and bank operation turned poorer day by day.

· The directors have created good asset in the form of self-owned building at Rohtak out of fund generated but diverted. Here this case was an example of healthy entrepreneur and sick industry.

The diversion of fund was traced and this amounted to about Rs 190 lacs during the past four years of operations which were as under:

This resulted into short fall in working capital and instalments payments to the bank resulting in to this bad shape. 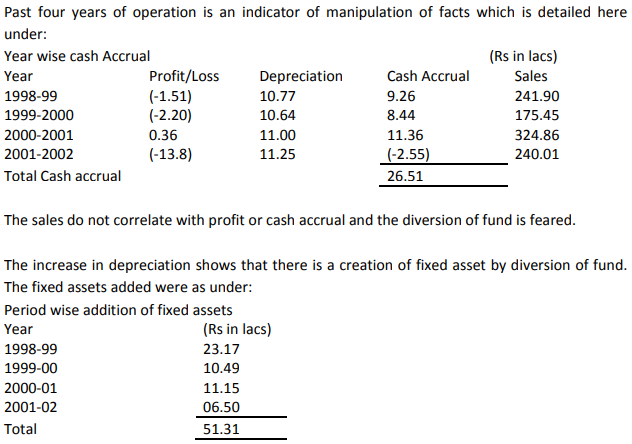 Decision by the bank to take up the rehabilitation/ restructuring

·  Closing the account of another bank- CBI Paharganj, New Delhi as banking with other  bank is not allowed mainly which is not lender to the company.

·  Restructuring the term loan and its repayment plan.

·  Since it was a wilful default, no concession in interest should be permitted.

·  The company should route the sales proceeds through bank account only and avail the bill limit by drawing bills through bank.

· The company must start working at least at 40% capacity utilisation which is higher than BEP and      try to increase its level of operation subsequently.

·   Additional security should be provided in the following manner

Pledge or mortgage of additional fixed assets created by diversion of fund.

Equitable mortgage of land and building of directors created in personal or family name.

Hypothecation of current assets covered under working capital and its renewal from time to time.

Bringing fund in proportion to margin (own contribution) as required by the bank by raising the paid up capital.

Considering the facts and reasonable opportunity and probability to put the company on a proper track it is possible to rehabilitate the company by adopting honest practices and by creating a smooth bank-customer relationship. The care the bank should take is a stricter follow up, monitoring and control.

·  The assets which may turn idle or scrap will be utilised.

·  It will create better employment opportunity for the youth.

·  The banks money will be realised and its NPA will be reduced. Also the bank will gain in long term in the form of interest earning which will keep on growing in relation to the growth of the company.

·  The company directors and shareholders will be satisfied persons.

·  By growth the company will expand providing more services to the nation.

a) What have you learnt from this case?

b) Why this industry faced this problem?

c) Is it the case of NPA or sickness?

d) How did the bank tackle this case?

e) What were wrong practices the company adopted?

f) What corrective measures do you suggest?

g) Conduct a SWOT analysis on this case?

h) What were the recommendations of the bank? Do you agree with the bank’s decision?

i) For additional security of the loan what documents you should obtain as a branch manager?

j) It is very easy to call up the loan ending the bank-customer relationship but it is difficult to retain it for a longer period. In your opinion what would be the advantages to the company, its shareholders, bank and the nation if it is brought back to good health as a discipline entrepreneur?

Answer all the following questions.

(a)    What are the important documents banks generally obtain for each liability (loan) created? Mention period of each type of documents before it is time barred. As a consultant to the bank what guide lines you should provide to the bank to prevent the document to become time barred?

b) You are working as a bank manager and have received a loan proposal for a large industrial sector related to setting up a thermal power plant. The total loan requirement is Rs 10,000 Crores which for a single bank is not feasible. What step you will take to see that the requirement of Rs 10,000 Crores is met?

c) What are the problems faced by India in implementing BASEL committee report?

For a quick and honest grievance redressal ‘Banking Ombudsman’ was created. Discuss the objectives of Ombudsman and type of grievances generally covered under it. Is it advantageous to the society and will it acts as a tool to create a healthier and an ethical customer relationship? Support your answer with suitable examples where help from ‘Banking Ombudsman’ can be taken.

Mechanisation and e-banking has provided speed and comfort for both the banks and the customers but at the same time it has generated risks. Discuss the risks associated with ebanking and your suggestions to minimise it. Give suitable examples of risks possible in ebanking system and its control mechanism.

In the year 1935 Reserve Bank of India Act was framed and after independence the Banking Regulation Act 1949 was created. Describe the reasons of this change and important provisions built in it. Explain how this Act is going to strengthen the banking system in India.